With 27 different Facebook Ad options and placements available for creating your campaign, to choose from, the process can be a bit overwhelming for advertisers. So, Facebook decided to make things a bit easier…

Last week, Facebook announced that it intends to simplify the ad creation process and concentrate on advertiser objectives, making it easier for both advertisers and users to interact with ads. So, instead of wondering which type of ad you want to create, Facebook will now ask the question, “what goals do you want to accomplish?” It will then, suggest the types of ads that will be most effective for achieving these goals.

“You are going to pick an objective,” said Fidji Simo, Facebook’s product manager for ads, at a news conference at the company’s head­quarters. “Based on that, we will show you a range of formats.”

The new Facebook ad process will provide potential solutions for aims, such as increasing your fan base, raising traffic to your site or store, growing brand awareness, driving videos, Likes, or online sales, and much more. Also, rather than creating separate ad types in order to accomplish an objective, the new ad process also allows you to combine goals. Instead of having to choose between, say, different Sponsored Stories and Facebook Ads, you will be able to merge them all into one!

These new options will also make admins’ posts more attractive to users. For example, previously text-only question ads that produced minimal engagement can now be paired with a lively photo. 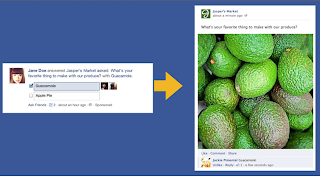 Facebook has not set a date for when this new process will rollout, but plans to do so in the next couple of weeks. Get ready – clearly defining and achieving your advertising objectives is set to become simpler than ever!